What’s the Big Deal About Being a Black Belt?

I’ll admit it, I’ve been know to be somewhat evangelist about sharing the benefits of martial arts training with my community. When you’ve played a first-hand role in as many martial arts success stories that I have, it bodes the question why wouldn’t I be excited to share the good news with as many parents as possible. On one occasion, I distinctively remember a few parents asking me: “What’s the big deal about being a black belt?” After they asked, I could see in their faces, a genuine  curiosity. They truly wanted to know what’s the big deal and why was I passionate about this.

What does it mean to be a Black Belt? 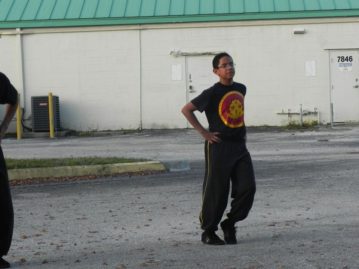 Oscar warming up for his Black Belt test.

Throughout our society, earning a Black Belt is an achievement that has become synonymous with excellence. Similar to someone who became the valedictorian of their high school graduating class. The big deal about becoming a black belt is the dedication and hard work that the student puts into his or her training, culminates with an accolade very few people have ever achieved.

In the spring of 2013, Oscar Mora Jr. and his father Oscar Mora Sr. became Black Belts at Quest Martial Arts. Listen to what Oscar Jr. had to say about how becoming a Black Belt changed his life:

“I am Oscar Mora and I have changed a lot since the day I joined Kung Fu. I never would have thought that I would become a black belt in this amazing art. I used to be a reckless kid who would do before he thinks. I never tried too hard for anything because things came easy to me back then. But the things I have learned in Kung Fu have helped me in everyday life. I did not just learn Kung Fu. I did not just learn self defense. I learned commitment. I learned dedication. Responsibility. I learned so much more than what I thought I was going to learn in Kung Fu.”

Oscar hanging out with his classmate during graduation.

“I learned manners such as using the words sir and ma’am. Now I am very good at using these words all the time. I became calmer after joining Kung Fu. I used to get mad very quickly. Now, it’s really hard to make me mad. I have more confidence now in everything that I do. Kung Fu has helped me in school. I am now at one of the top schools in the country and I am one of the top students at the school. I recently got a letter to start college early. This would not have happened if  I had not joined Kung Fu and become a Black Belt.”

Can we stop right there for a second? Which one of us wouldn’t want the benefits Oscar gained from becoming a Black Belt for our children? He talks about learning manner’s and gaining a level of confidence that helped him get into one of the top schools in the country and become one of the top students in his class. I think we can all agree that this is a big deal. 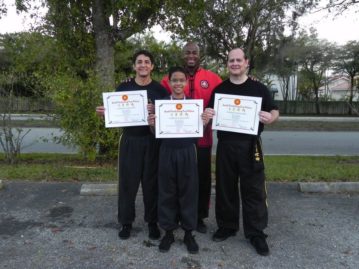 Oscar along with his dad and his classmate Bruce Moore after they completed their Black Belt exam. Sifu Johnson is featured in the picture as well.

“All of these lessons have helped me so much. They also sparked me to be healthy. I used to be lazy, but now I am constantly doing a sport or trying to be fit and healthy. It’s also very cool to be able to tell your friends that you’re a Black Belt. It surprises them. Honestly, I would not trade what I’ve learned in Kung Fu for anything. Responsibility, commitment, dedication, self-confidence, self defense and manner. These are all just some of the things I learned doing my journey to Black Belt.”

The positive outcome that happened in Oscar Mora Jr.’s life is why becoming a Black Belt is a big deal. Need I say more?